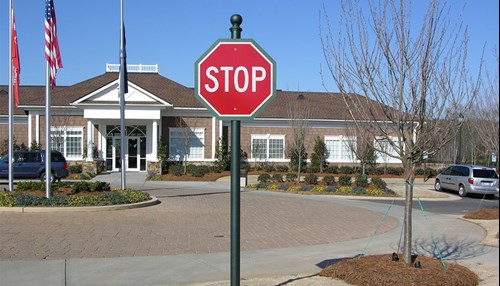 There's a lot more to street signs than we realize.  We pass them every day from the time we are little kids till the end of our lives.  Many of us take their existence for granted and we most likely understand what most of them mean by the time we are driving or within a few years.  There was a point in time though when traffic signs weren't very common or even nonexistent.  This led to a lot of accidents and avoidable deaths.  Even with traffic signs today though, people still miss them and have accidents; so is there a way to make our signs pop out more to drivers?

Before cars came along, there were traffic signs here and there, mostly for cyclists and horse drawn carriages, but there was no uniformity to them.  After cars began to grow more common across the U.S. from 1900-1920, drivers clubs began making signs and maintaining them to help make roads safer for themselves and other driver enthusiasts.  This worked in the beginning, but as cars continued to grow in popularity a need to matching uniform signs became necessary.  Thus in 1922 representatives from Minnesota, Indiana and Wisconsin came together to decide upon unique shapes which equated to specific messages.

The logic behind this was to help drivers in the dark know the meaning of a sign when approaching it without being able to read it.  These signs all had black text on a white background.  These signs would be presented and adopted as the earliest national standardization in 1935.  This meant Orlando decorative street signs and other non-conforming signs needed to be updated.  In 1948 after some years of confusion, the government made some changes to help with standardization.  Interesting fact, stop signs only became red with white lettering after the invention of fade resistant materials in 1954.  Other changes eventually led to the signs we have now for warning people about danger by having the background yellow with black text.  Speed limit signs still resemble their original progenitors.

One issue that has always existed with traffic signs and continues to plague our roads today; are drivers not noticing them.  A recent study done by scientists sat a group of participants in front of two different sets of signs.  Each set had four signs with the same meanings, but the second set had signs with more dynamic images.  The participants said the more dynamic signs were more eye-catching and increased their awareness of their surroundings.  While this was one test and this was the first time seeing these signs, previous research shows more dynamic signs are more likely to catch and hold a driver's attention.